Bill Ungless was a pupil architect at Johns, Slater and Haward in Ipswich. During this time he also enrolled as a student at the Ipswich School of Art where he attended the studios of Colin Moss and Bernard Reynolds.

He completed his studies at the Faculty of Architecture at University College London, (with lectures and life drawing at the adjoining Slade) where he was awarded the Sir Bannister Fletcher Medal for the best student.

He followed this with two years working in Milan and Berlin, and after this in the office of Sir Denys Lasdun on the design of the University of East Anglia. He then set up an architectural practice in London as Neylan and Ungless where the practice won competitions in England and The Netherlands, a Civic Trust Award, and a DoE Good Design in Housing Medal. During this time he lectured, taught and examined in Universities in England and Europe, and published criticism and articles in Professional Journals.

Alongside his architectural practice he has always drawn and painted. Since retirement he has become engrossed with the coastal landscape around Walberswick.

He has shown with the ‘Artists of Walberswick’, The Suffolk Coastal Group and had a one-man exhibition of his work at The Cut in Halesworth in 2012.
All art shown on this site © Bill Ungless

Use the arrows to scroll through the images. 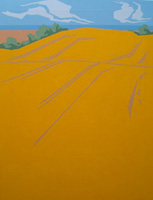